3D point clouds vs. a platform for digital twins

You can think of Matterport as another tool in Existing Conditions' toolbox. While 3D laser scanning and BIM allow for a higher-accuracy digital model, we are happy to create Matterport files to suit your needs. If all you need is a virtual tour and good imagery of your space, instead of a set of accurately dimensioned drawings or BIM, a Matterport model by Existing Conditions may be the best route. 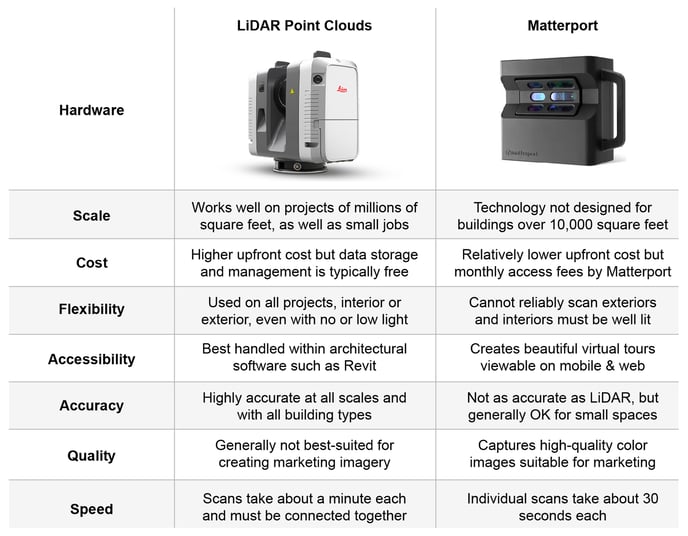 When you hire Existing Conditions, our work typically consists of delivering 3D laser scanning data and building information models. 3D laser scanning is a non-contact, non-destructive technology that digitally captures spatial data on the physical environment using a line of laser light. Three-dimensional laser scanners create “point clouds” of data from the surface of an object.

In comparison, Matterport is a 3D media platform lets you create, navigate, modify & share interactive 3D models. Matterport's roots are in high-end cameras that are designs to capture multiple images of a space and stitch them together to make a Their cameras and virtual tour software allow for people to digitize their buildings, create 3D tours, print photos, and draw schematic floor plans.