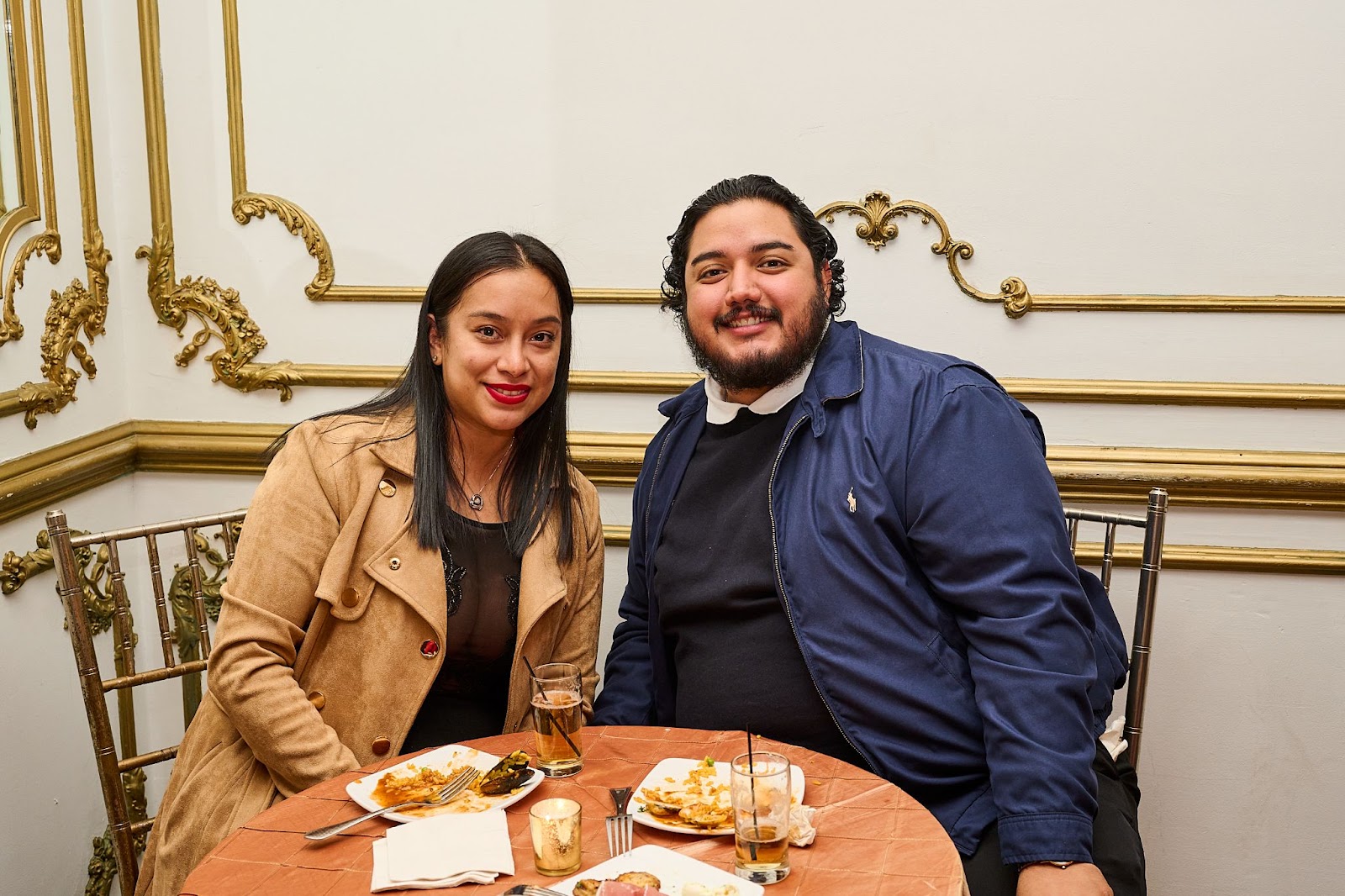 Our team at Existing Conditions had a great experience attending the AIA Queens Holiday Party this year. The event was held at the beautiful Terrace on the Park, with delicious food and drinks, and a festive atmosphere. We had the opportunity to network with other professionals in the industry, exchange ideas, and learn about the latest trends and innovations in architecture. Ruben Ramales, Executive Director at AIA Queens, and the chapter were pleased to see a younger crowd at the event, as they are committed to developing the chapter through their meetings, sponsorships, and educational resources for architects. They want the chapter to be a reliable resource for professionals in the industry. Overall, it was a memorable and enjoyable experience, and we felt very welcomed by the chapter.

Gabriel Lopez, an Operations Associate at Existing Conditions, attended the AIA Queens Holiday Party for the first time this year. Gabriel enjoyed seeing other professionals in the architecture industry being recognized for their hard work and contributions at the AIA Queens Holiday Party. Gabriel appreciated being able to participate in the celebration and show his support. One of the most memorable moments of the evening for Gabriel was winning a set of wine glasses in the raffle. With that being said, it was a memorable and enjoyable experience for him. 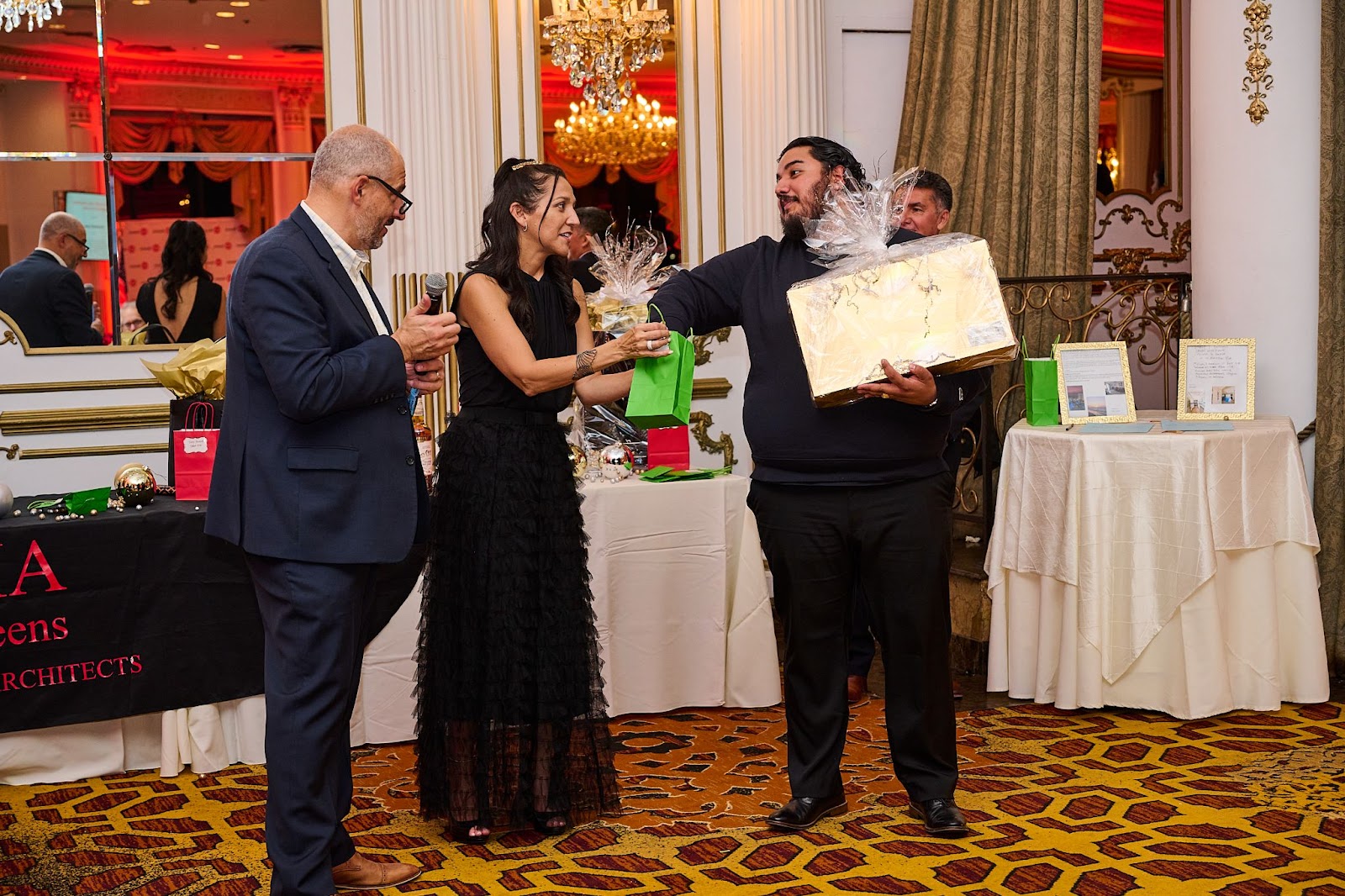 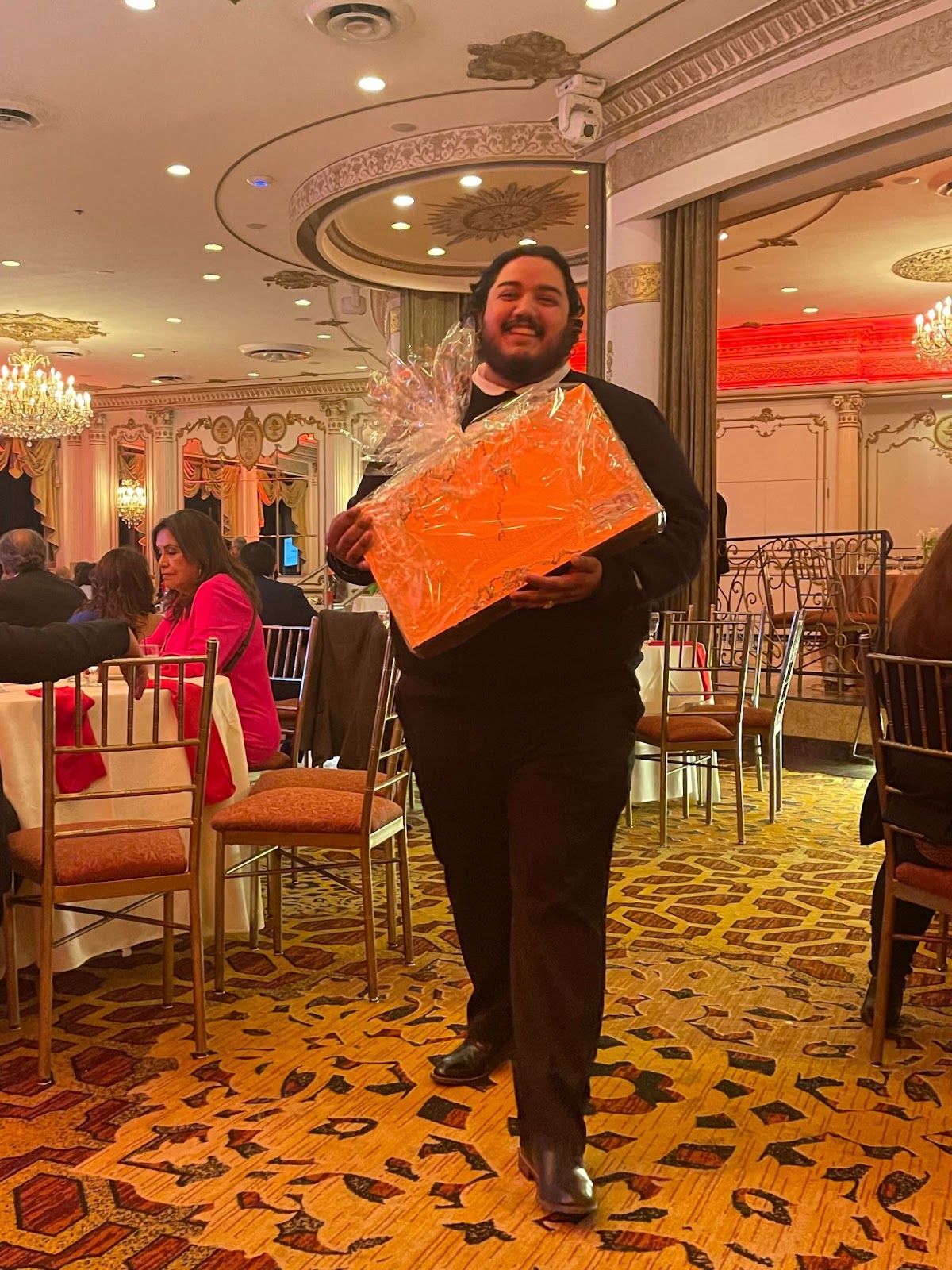 The AIA Queens Holiday Party gave Jesus the chance to reconnect with his former architectural teacher from high school, Helen Vachicouras, who is now one of the directors at AIA Queens. Jesus was able to catch up with her and learn more about her current work in the industry. Helen was also a winner in the raffle and received a Scotch bottle as her prize.

Jesus also enjoyed reconnecting with Gerald Rabel at the AIA Queens Event. Gerald is an integral part of the architectural department at the High School of Art & Design and also teaches at City Tech. As a graduate of both of these programs, Jesus is confident that the current students are receiving a high-quality architectural education thanks to Gerald's passion and knowledge.

Jesus also enjoyed the opportunity to finally meet Jessica Peña, Director of Development at Flushing Town Hall, in person. We had been in talks with her for some time, and it was great to finally meet her at the event. She also won a prize in the raffle, which added to the festive atmosphere of the evening. Being at the “winning table” allowed us to create personal connections with these professionals. Personal connections are important in the industry, and the group agreed that it is important to work with enjoyable professionals.

During the cocktail hour, Gabriel had the opportunity to connect with other professionals in the industry, including Katiuska Medrano, Architect from KaTarchy Inc. who mentioned to him that she appreciated seeing other Hispanics in the field. Gabriel was also able to connect with Ruben, who expressed similar sentiments. This experience was meaningful for Gabriel, as he was proud to represent Existing Conditions and the Hispanic community in the architecture industry.

One of the most memorable moments for Paul Lindsey, Account Executive of Existing Conditions, was having the opportunity to speak with Franklyn Roth, who has been involved with the AIA chapter for many years. It was valuable to connect with him and learn more about his experience with the AIA Queens chapter, as well as the projects he's working on these days at the MTA. All in all, the AIA Queens Holiday Party was a memorable and enjoyable experience for our team. 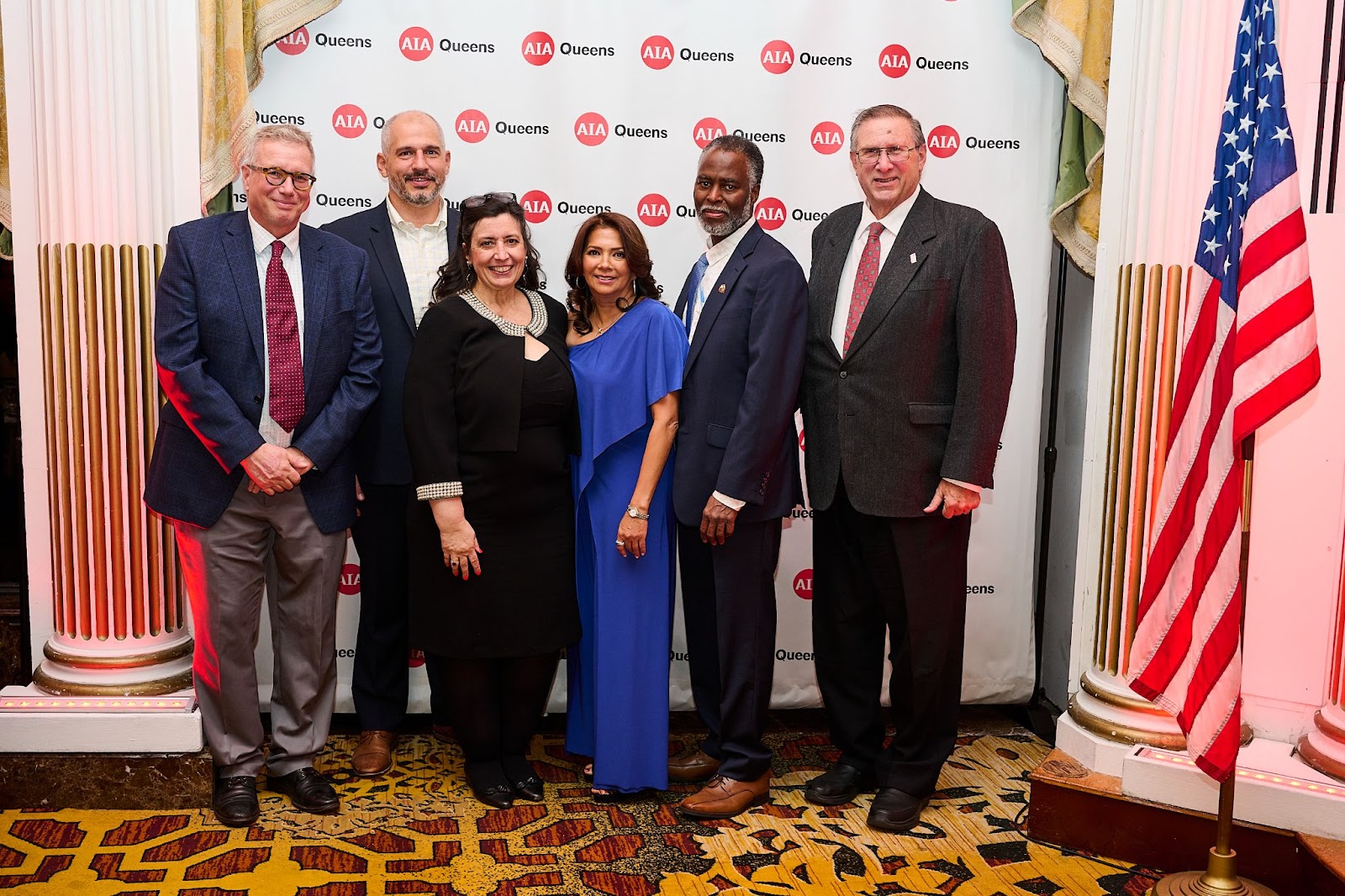 I recently had the opportunity to interview Ruben Ramales, who was responsible for organizing the AIA Queens Holiday Party. Ruben shared details about the planning process for the event, which was intense, as the chapter had a shorter amount of time to organize everything compared to previous years. Ruben explained that the planning usually began several months in advance, but this was not the case. The first step was reaching out to vendors that the chapter had worked with at their last Holiday Party in 2019, including Terrace on the Park, who offered two different spaces for the event. In addition, Ruben reached out to past photographers and DJs. It was important for the chapter to bring back elements of past holiday parties and create a sense of nostalgia for attendees.

In order to ensure the event's success, Ruben and the chapter had to work closely with the event venue and its staff, as well as communicate with their board and other stakeholders. This involved coordinating all of the details, from the layout of the space to the catering and entertainment. As the event approached, they had to monitor the number of people who had signed up and adjust their plans accordingly. In the end, the event was a success, with more people attending than they had initially planned.

It was also a reminder of the value of nostalgia and bringing back elements of past events. Finally, it was a great experience for Ruben and the chapter, and they look forward to building on the success of this holiday party in the future.

The AIA Queens Holiday Party included the recognition of various members who have made important contributions to the organization. Ruben made sure that all leaders, including the current and incoming presidents, had the opportunity to give remarks during the ceremony. It was important for the chapter’s current president at the time, Frank Quatela, to have the opportunity to speak at this event as it was the largest in-person event of his presidency. The current president of the AIA Queens chapter for 2023, Jacqueline Vasquez, presented Frank with an award in recognition of his efforts and presidency. 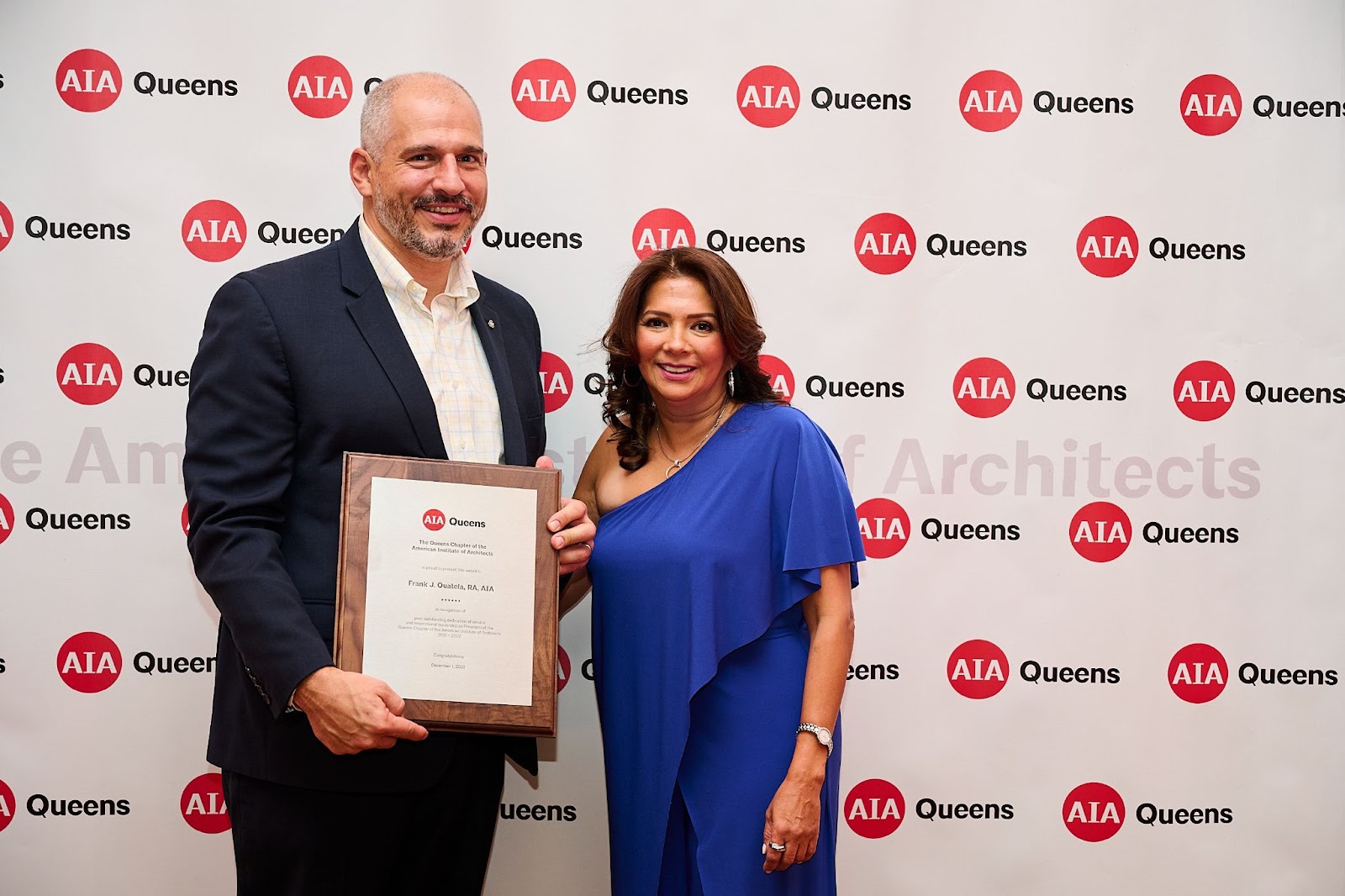 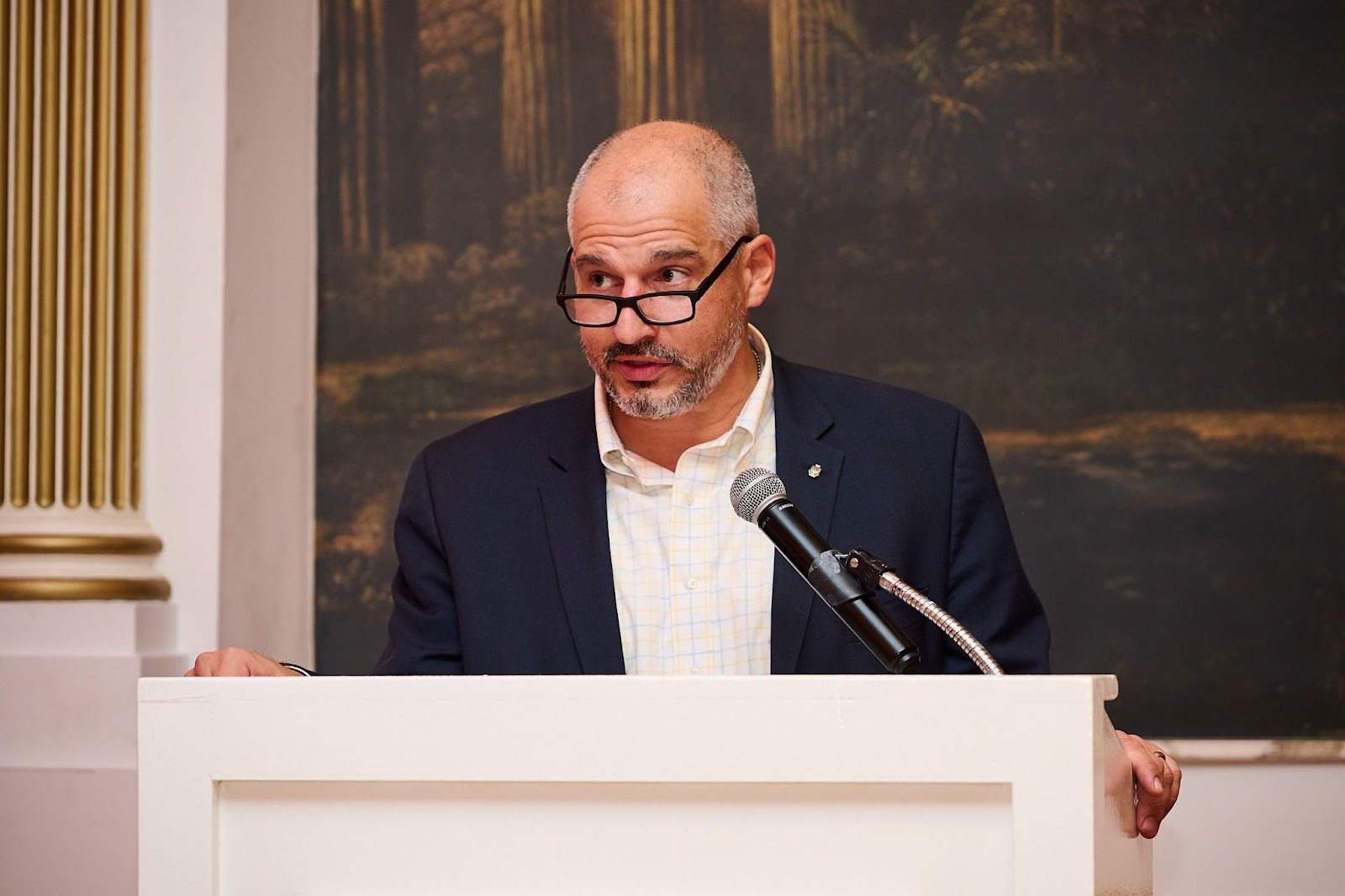 How Does the AIA Queens Holiday Party Make a Valuable and Enjoyable Experience?

The AIA Queens chapter takes pride in hosting a good party, with the goal of getting people on the dance floor and having a good time. A wonderful job was done by Gil Vaknin in capturing these moments. In addition, attendees have the opportunity to reconnect with old friends and meet new people from other chapters, affiliates, and sponsors. The cocktail hour serves as a chance for people to break the ice and get to know each other before the event officially begins. 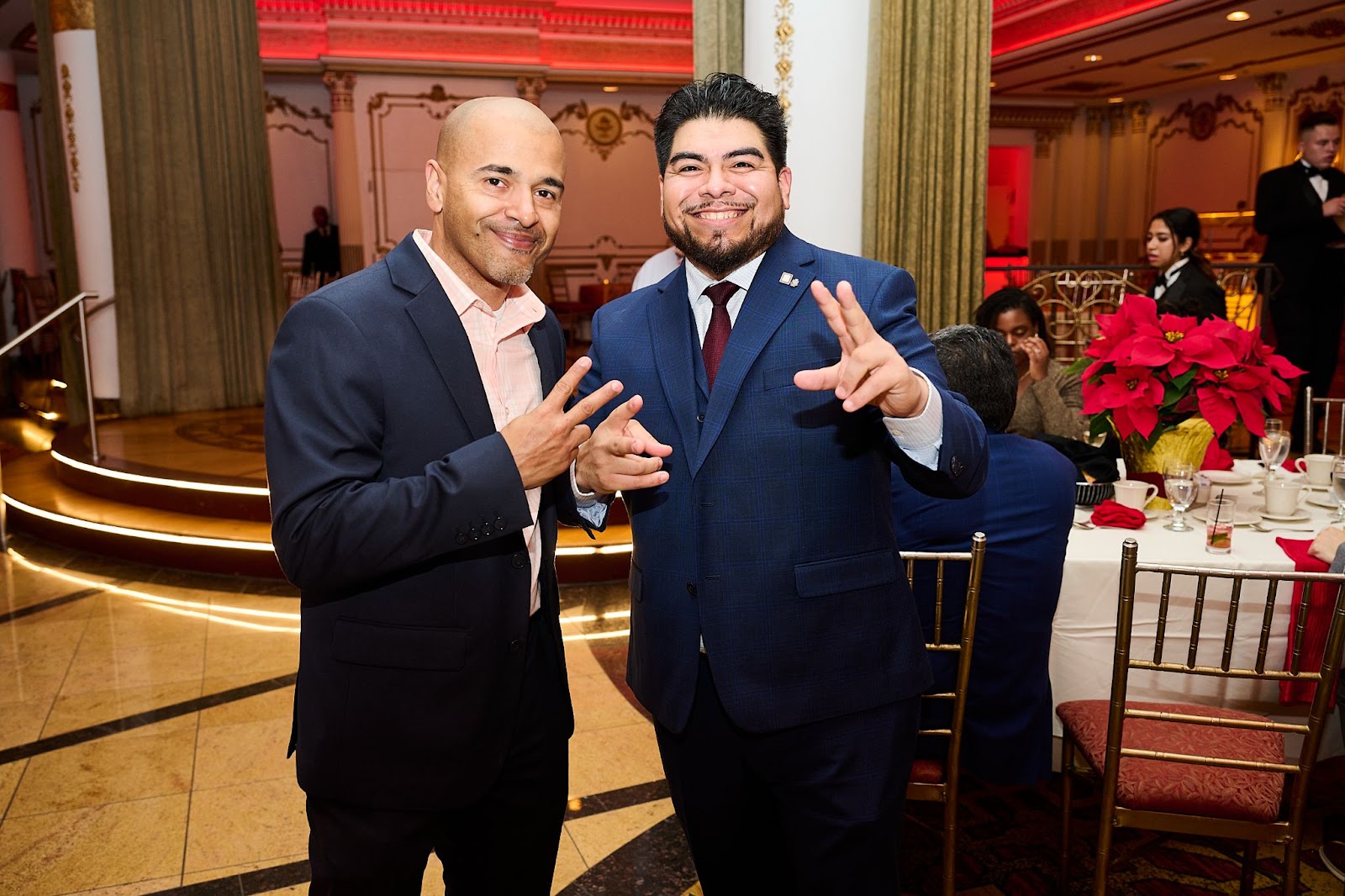 Ruben notes that one of the most intense but enjoyable parts of planning is the seating arrangements. They aim to place people at tables with others they might have a connection with or could potentially build a relationship with in the future. For example, Ruben made sure to seat a former educator that Jesus Bravo had a connection with at the same table. Ruben also placed a professional from the National Association of Women in Construction at the same table, as the two organizations work together on a design competition each year. 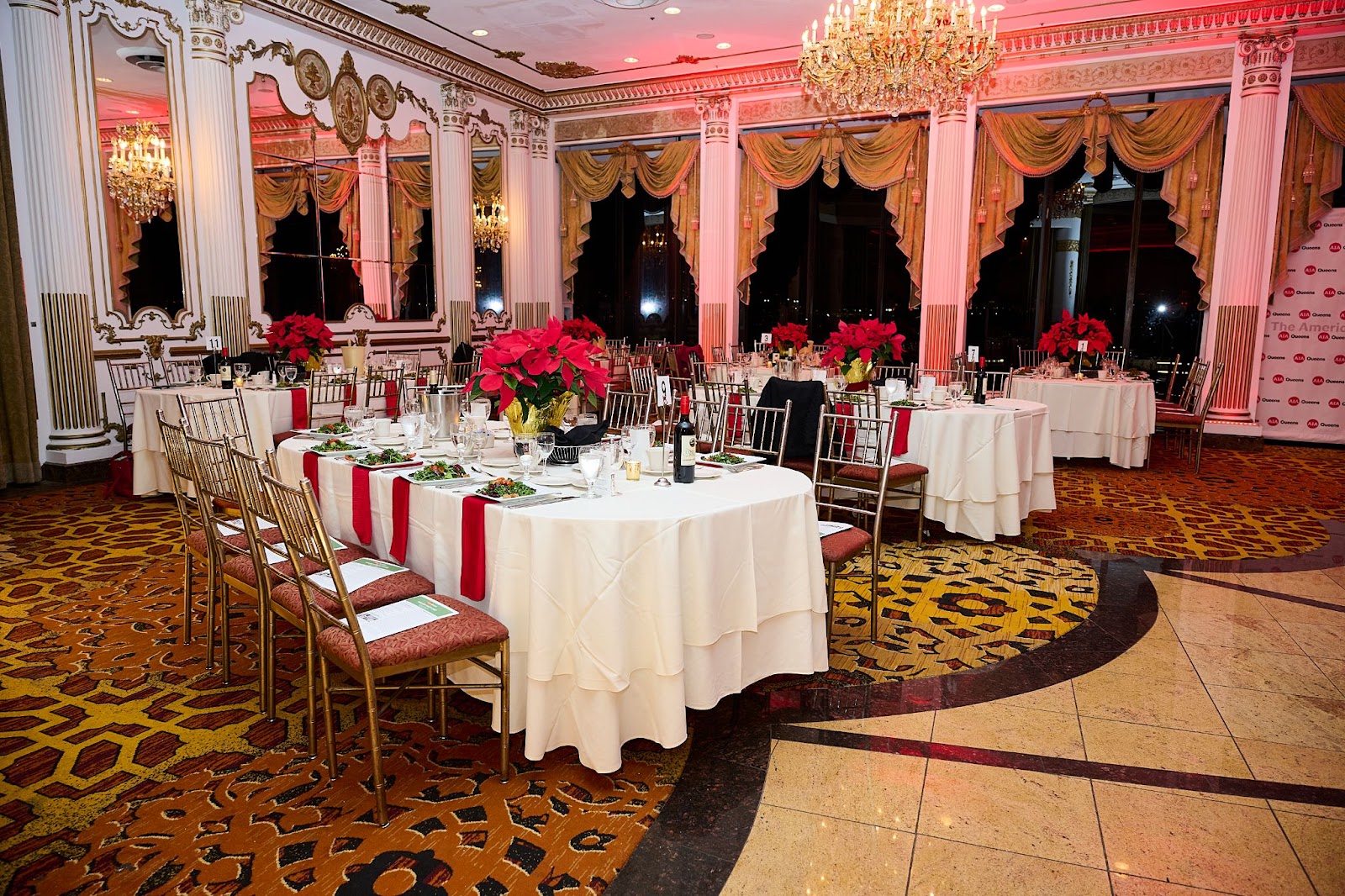 In addition to drinking, dining, and dancing, the event also includes raffle prizes, which were a hit with attendees. The chapter has dedicated volunteers who put in the time to secure and sell these prizes, ensuring that the event was engaging for all attendees. The event was a huge success, with people leaving feeling like they had made new connections and relationships worth building on in the future. 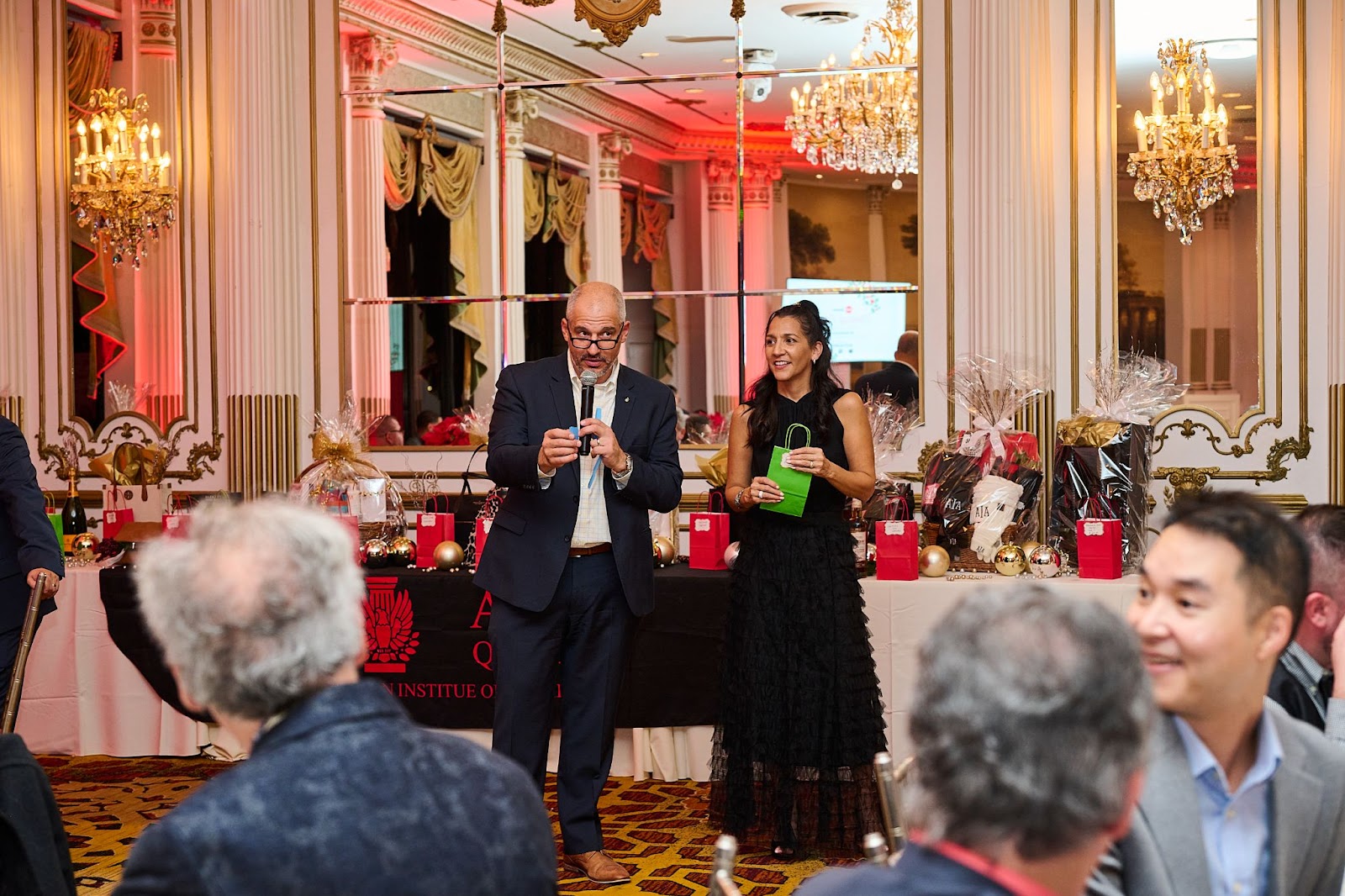 Goals and Mission of AIA Queens

The AIA Queens chapter is an organization that serves as a support system and community for its members. In addition to providing continuing education, the chapter has also focused on creating events that bring people together and foster a sense of comradery. This aligns with the mission of the organization as a whole, which is to provide a supportive network for its members to learn and grow together.

The board of the AIA Queens chapter is currently working on rebuilding a sense of community within the organization. They want to bring people back into in-person spaces and remind them of why they joined the association in the first place. While the timeline for this rebuilding process is uncertain, Ruben emphasizes the importance of being patient and understanding with their members and leading with love and compassion.

The AIA Queens chapter is committed to supporting and bringing their community together, and they recognize the importance of rebuilding connections in the current climate. They hope to lead by example and create a supportive and welcoming environment for their members as they move forward.

Are you interested in becoming a member of AIA Queens? Connect with Ruben at aiaqueenschapter@gmail.com.

The AIA Philadelphia Design Awards event is a celebration that brings professionals in the architecture and design industry together. It was my and... 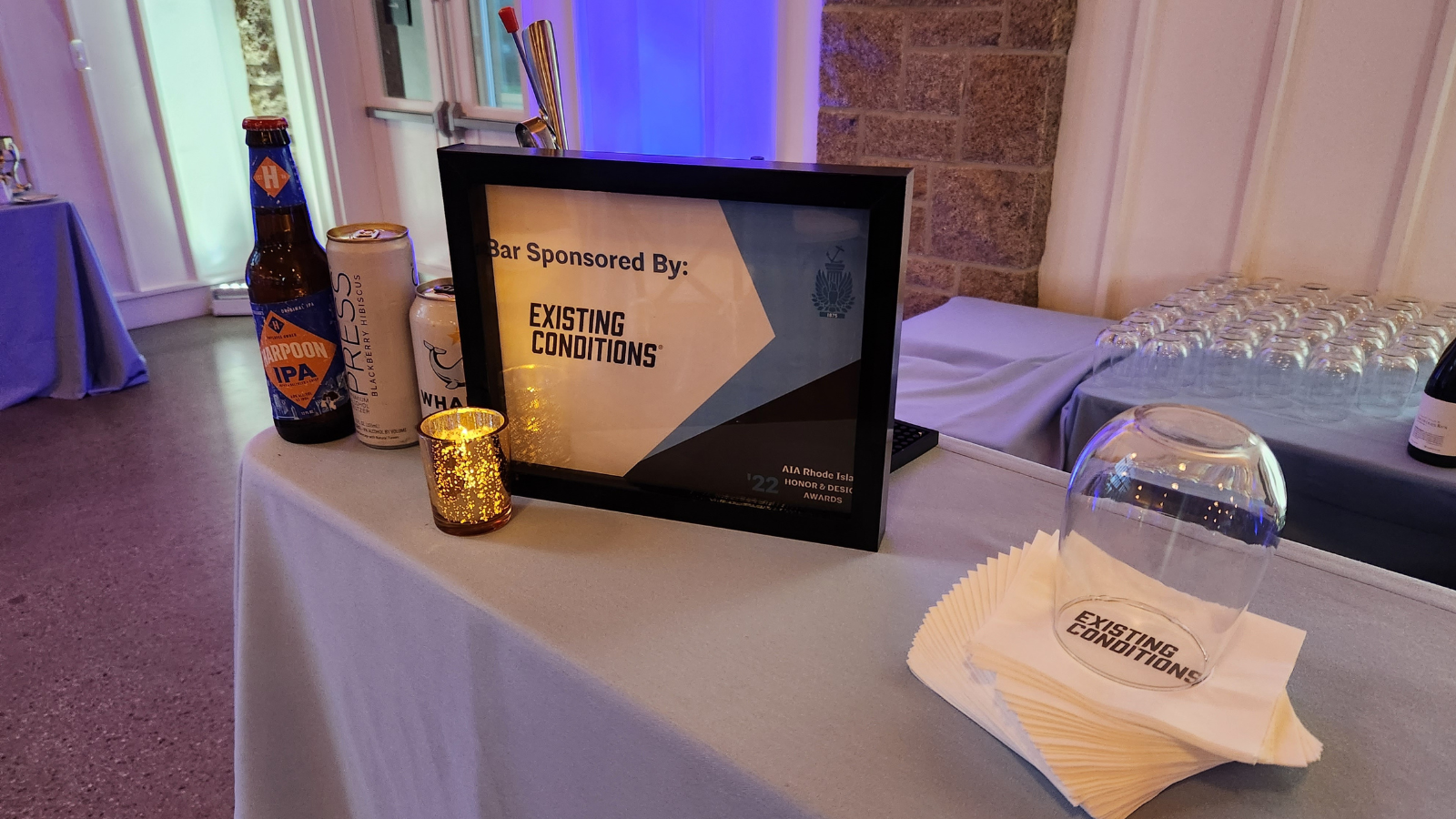 We are thrilled to have participated as a bar sponsor in the AIA Rhode Island Honors and Awards event for the first time this year. The evening was a...

Our team at Existing Conditions had a great experience attending the AIA Queens Holiday Party this year. The event was held at the beautiful Terrace...